He might not have a motto, but Richard Moross definitely does have a lot of experience in all things MOO. He set up the company, after all. So we stacked a deck of burning (and not-so burning) questions in front of him and let him do the talking. The result was a mixture of business advice, Instagram follow advice, and what not to name your brand.

I definitely don’t have a motto. I know what the Arsenal motto is. That’s Concor Cre… Actually, I don’t know what it is. I should create a motto. I’ll have one ready next time.

About 20 more questions that I’m not gonna be able to answer! From a business perspective, change. The business has grown a lot over the last 15 years. And the pandemic has forced us to rethink a lot of things, but also allowed us to think more freely about what the future can hold.

There were a bunch of names that got shortlisted, I think MOO was originally written like the Greek Mu. I remember there was another company that had a similar name, and I was interested in that. And then it just became m, o, o. And then I saw that website was available, and started tinkering with logos and it stuck. And it has nothing to do with cows. [It’s] short, memorable, with two lucky o’s. 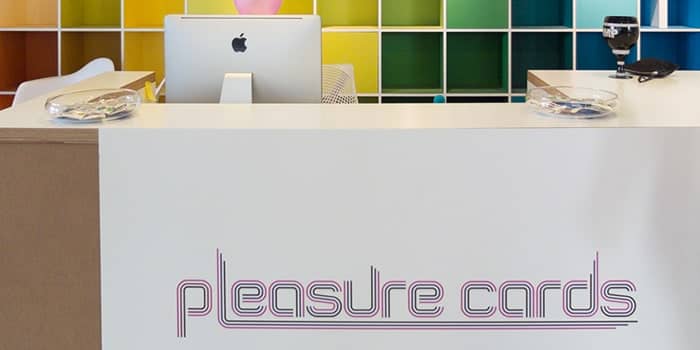 I’d say in about 13 and a half years, go and live in the countryside, move to New Zealand. On a more serious note, there’s nothing I regret. I’ve obviously made mistakes, the business has done stupid things and discovered a lot of stuff along the way. And I think that’s all part of the really fun tapestry of building a brand and a business and growing a company. And the fun of growth is always making mistakes and messing things up and learning from them. It’s part of the process of getting better at what you do.

I don’t think I’d want to spoil it, either. I often think if I could [time travel] backwards or forwards, which would be more interesting or valuable. The journey has been brilliant, and I wouldn’t really change anything about it.

Why did it start with business cards? 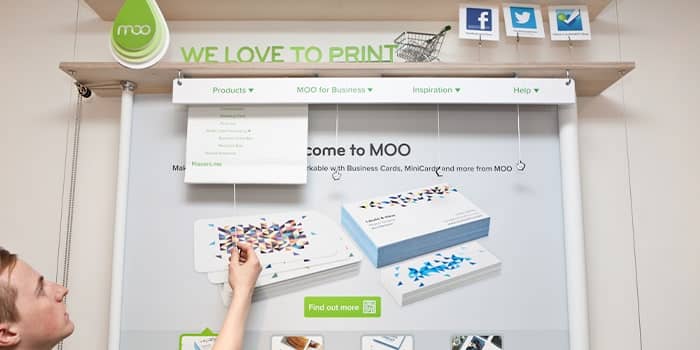 What brands have inspired you, then and now?

Brands that I thought were very well constructed, not necessarily a brand that evokes anything to do with MOO, but I was talking about how Orange did their branding when they launched as a mobile brand here in the UK, and just how tight and clever and crisp that was. I think if you look today, there are very well thought through brands like Oatly, who I think we talk about internally and admire a lot of the work that they do.

What advice would you give a young entrepreneur?

I can tell you some of the things that were taught to me that I practice today, that have been powerful and have helped. One of the things that one of our early investors, and board member for this whole time, Robin Klein, told me way back in 2006 was get the bank balance sent to you every day.

And every working day of the year, I get the bank balance. I know exactly how much money the company has in the bank every day. And obviously it moves in and moves out. We pay salaries, we pay for services and so on, but it’s a very good pulse to the economic health of the business. It’s not a very sexy answer, but it’s a very powerful thing to be reminded of every day in the business.

What’s been the biggest challenge?

The last 18 months have been the biggest challenge. But if I think about the entire life of the business, it’s probably more subtle than that, in that you never really know how long it’s going to take it. I’ve described it before as being [like] you’re not sure whether you’re in a 100-metre race or a marathon. And pacing yourself, and managing your energy and managing the expectations of the team and your people and the board and your investors.

Understanding what type of a race you’re in, how much energy to put in, how to preserve your emotional energy, your stamina, as an individual but for the whole company, is really important. And that’s ultimately how you end up surviving, getting through challenges, as it’s more of an underlying KPI for you.

The last a few months have been enlightening, devastating, hard. I think where we’ve gotten to, what we’ve come through, how we’ve performed, how we’ve pulled together, how hard people have worked… has been amazing and very difficult, but the learning experience of my career, certainly to date. 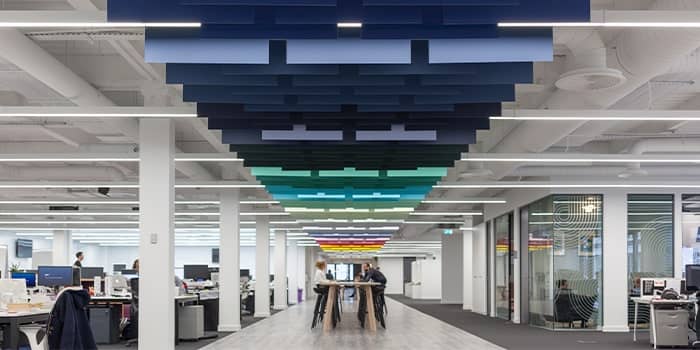 When did you think “This could be a business”?

It was clear on day one, when we had our first day of sales, that even for a funny little rectangular card, back in 2006. The first day when orders flooded in. We just knew it was there. You need economics [but you also need] what your customers are telling you and how they feel about it, and how they respond to it. And the powerful combination of those two things was validating really early on.

Alright, so I’m going to give you the pleasure cards pitch from back in the day. I think I tell the story to our investors who invested in Pleasure Cards. They also subsequently invested in what MOO became after that, but credit to them for backing the idea. But the basic idea was [that] the business card has been around for 300 years [or so]. Like all technologies that have been ultimately adopted by consumers, businesses kind of took them on first. So it’s a product that companies have used very effectively for centuries to help their employees hand out their contact information.

And the premise, back in 2006, and even earlier when I wrote the business plan, was [that] consumers now had far more ways to contact each other to share their time, their email, their mobile phone, their social network details, whatever it might be. So why shouldn’t consumers have the consumer equivalent of a business card? Which I called “pleasure cards” because it felt like when you go on a trip somewhere, they ask you “Are you there for business or for pleasure?” So it felt like pleasure was the opposite of business, although clearly a branding faux pas, and lots of learnings from that.

What’s been the most surprising way you’ve seen the products used?

Well, I know that I certainly use business cards as a thing to stop the table from rocking when I go to a restaurant. Guilty of that. And I think I use a Luxe, which is even more guilty, but very effective. So they do have a secondary purpose. 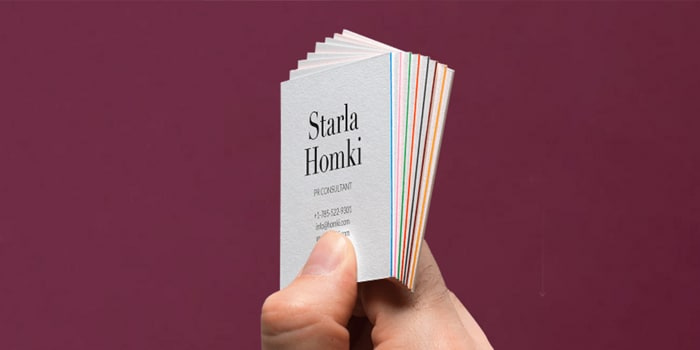 Probably to not stop learning, right? Being in a growth business like MOO is a learning experience. I mean, every day there’s something new to learn. I think the most important thing is being open to learning new things all the time and being open to making mistakes, but knowing that you don’t know it all, and being curious and hungry to learn more and to adapt and grow. I think that’s one of the great secrets of success.

What does Mr Hankey mean to you?

So, Mr Hankey is the Christmas poo from South Park, I believe. And in the very week that we launched, one of our software engineers, Dan Burzynski, was asked to play a sound every time we got an order. Dan’s choice was “Howdy-ho!” which is one of the things Mr Hankey used to say. It was sampled, and every time MOO received an order from a customer, that sound replay in the office.

I think we started off with every order, which included free orders and promos and stuff. That got so annoying. We had to turn it on to paid orders, which after a while became so annoying that we had to turn it off entirely. I probably would have a Pavlovian response if it was played now.

Who could you have not done this without?

There’s so many different people that have helped along the way, and I certainly could not have done it on my own. There have been extremely hard times where I was almost entirely dependent on having a brilliant team around me and a brilliant company to support what we were doing.

I suppose probably my family, my partner, my siblings, my parents. There’s no way that I could have done this whole journey without their help and support. Being a sole founder, I think it’s hard to be on your own when you have very difficult decisions. So family help.

The board [and] my investors have been hugely supportive. They’ve been around for a very long time as well, and I’ve had mentors who’ve been in the long term and helped. So it takes a village to raise an entrepreneur, it seems.

I love living in London. London is an amazing city with so many different things going for it. Great history, diversity of food, music, people, cultures. But I would love to spend more time in Rome, which is another city that I also love. I’m not sure whether I could live there, but one day I will sabbatical in Rome. 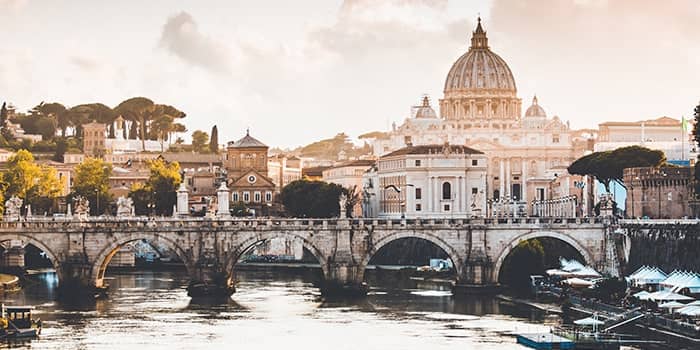 I follow Rachel Roddy, who is a food writer for The Guardian. Every time she makes a delicious meal I look at it and I just think, “I want to eat that immediately.” She’s just written a great book, which I bought and am cooking my way through it at the moment.

I also follow Plastic Free Hackney, and have learned a lot through watching their posts, being educational. I follow lots of designers. I follow people whose podcasts I listen to. But I would say, if you like Italian food, then Rachel Roddy is great.

What’s been your proudest moment so far?

Another super hard question! I think [because] it’s multiple peaks. I’m usually really proud of the people in the business when people do well, and they surprise me and I see them grow with the company. When I see people who are going from being the person being educated to person educated, and seeing them manifest.

I always like it when I’m surprised by how well people can articulate and deliver the brand when I’ve not been involved at all, I just think it’s really impressive. And I love seeing other people show a fully formed idea that’s completely, exactly what MOO’s about, visually, from an idea, architecture perspective, everything. I love seeing that.