Behind the Brand Refresh: GC Records

Whether you’re hoping to attract new customers, inject some newness into your masthead, or maintain your market position, a brand refresh may be in order. For Las Vegas-based punk music label GC Records, staying current and reimagining a brand over time is directly tied to their success. Here’s their story. 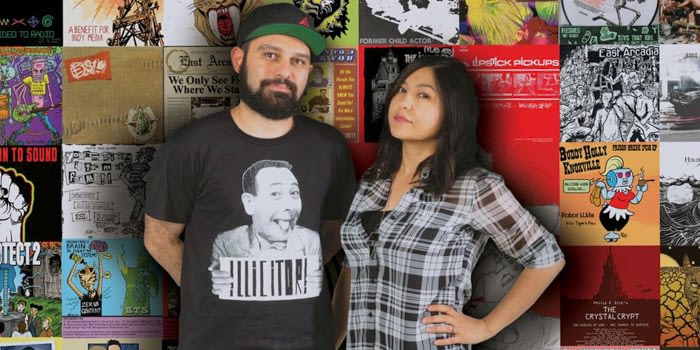 Throughout the music industry crisis of the early 2000s, when file sharing and piracy became more widespread, GC Records continued to support bands through merchandise sales. “Sometimes we would find ourselves bankrolling the whole album to get a 7″ out,” Zargari says. They also saw the value in helping their artists during tours to get to the next city.

With the changing climate in the music industry, as bands gain access to platforms like iTunes to sell their music, artists don’t always think they need music labels. The major appeal for GC Records – aside from the small, boutique-like quality and personal relationship with the artists – is and has always been about the merchandise. When a band member or customer notices the labels’ artwork and attention to detail, they’re drawn in. Now, in their 16th year, Zargari credits the “transparent company culture” as a reason why they’re still going strong, “as opposed to a big label where you have no idea who is running the show.”

The GC visual identity has taken many forms, beginning in 1999 with a symbolic star. “I was in college, and we didn’t know what we were doing. The first logo looked like the Converse star or a baseball logo — it was too simplistic and got lost in the shuffle,” Zargari admits. 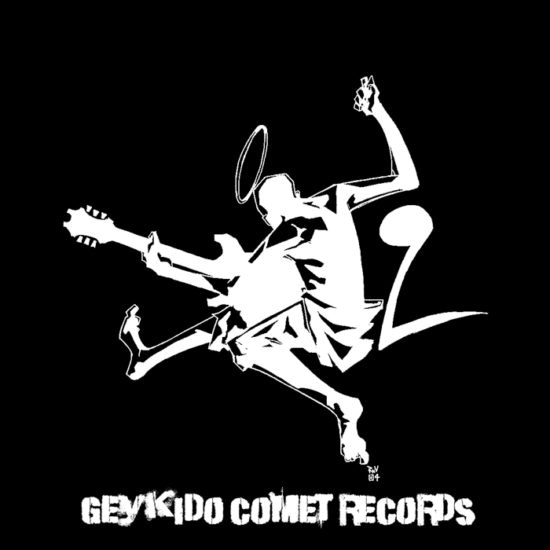 After a solid three-year run and a falling out with the original logo artist, the label was ready for something that “would stand out — something hand-drawn and not built in Photoshop.” They approached a new artist in 2002, who created the monk concept which they all loved. The monk, jumping in the air while strumming the guitar, had a very distinct look and feel. “The billowing monk attire, the wildly pointy guitar, and angles made by his legs … It was very eye-catching and original,” says Zargari. “Because it was an illustration, you could see the meticulous design work that had to go into the creation of such an angular piece versus the super simple baseball star. And, in the end, it looked mighty sexy on the back sleeve of our releases.”

Building upon the success of the all black-and-white 2002 monk identity design, the angry comet logo of 2010 offered more options for printing and rendering on merchandise: one colour, two colours, or full colour. (The comet was also the inspiration for the bigger rebrand of 2015).

In 2008, Zargari and his team started work on their 10-year anniversary project – a DVD of highlights from the last decade – and GC Records commissioned London-based designer Delme Rosser to work on the design and artwork. “At that point in time I was designing a lot of artwork that ended up as stickers on walls or on the bottom of skate decks — strong colors, clean lines, passing pop culture references, and often containing some kind of mascot character.”

“The (existing) GC Records logo had a particular illustrative quality that I don’t work in,” Rosser explains.

But with so many logos and different music, GC needed people to care about the brand, and more importantly, to recognize it. And it’s worked. 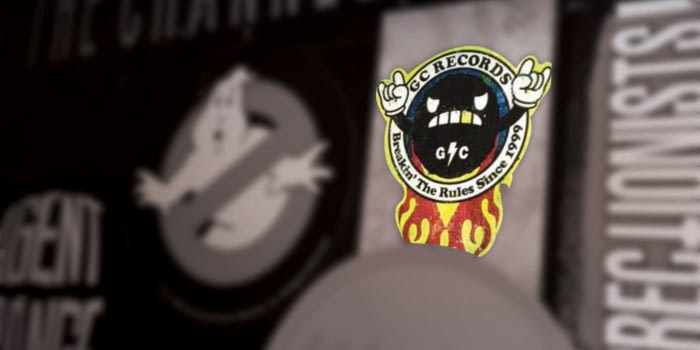 But why did they decide to completely rebrand in 2015? Zargari knew that a clear and consistent identity was in order, as he wanted to have one clear mark that represented the whole business. He and Rosser already had an established working relationship, and Rosser was an ideal artist to remake the logo. “I like what Shahab does,” Rosser says, “and working with his brand has been relaxed and organic. My aim has always been the same: Give the GC folks something that their fans will be happy to see, and that I know will look fun however they decide to implement it.”

“Given the chance to reboot the logo, I went with something that was more in line with what I was doing,” Rosser explains, “and something that captured what the ‘GC’ in GC Records represented.” “Geykido” is the English spelling of a Japanese word, meaning “ultimate anger,” so the name roughly translates to Angry Comet Records.

Delme Rosser’s signature style incorporates scary, stylized demonic cartoons — making his designs especially memorable. Devil-like horns with mouse ears is ironic, and he took the existing gloves concept to remake the chopped hand logo. But by the end of 2015, Rosser knew the logo design wasn’t translating well across the brand’s channels (especially social media), so he reworked it for all of the social platform constraints. The resulting design was colorful, clean, minimal and, of course, cartoonish.

“There’s something to be said for the one iconic logo that embodies the tone and voice of what we do. It gives all the personality that you need for the brand. Emoji-style —it’s universal,” Zargari says of the recent brand refresh. The easily discernible rocker hand symbolically represented their beginning as a punk label, while the bone-white hand contrasted nicely with the red blood.

While the prior star (1999) and monk designs (2002) were both flat, this logo brought consistency. Zargari was looking to achieve a more uniform brand identity and consistency after years of flexing and shape-shifting. 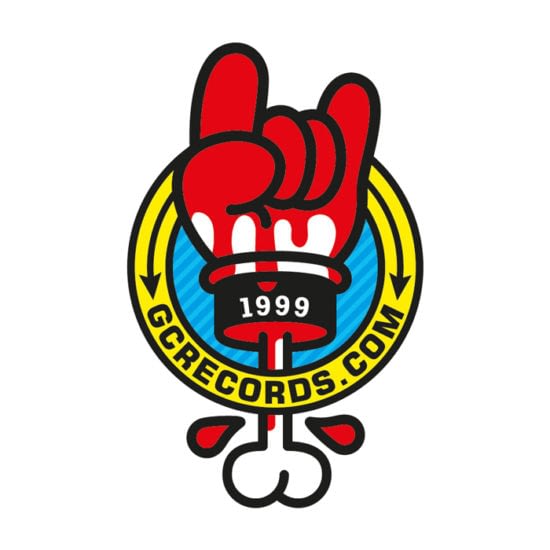 GC Records also ran a scavenger hunt across multiple cities to coincide with SXSW, and everything found by participants showcased the new GC logo. “One of the cities they hit was Austin, which fell in love with Peelander-Z, whose first 7″ we released in the early 2000s,” Zargari explains. The city falling in love with the band gave them a lot of exposure—which eventually led to Peelander-Z signing to an Austin record label.

The introduction to the new GC logo was subtle, yet strategic. Zargari wanted audiences to feel like this was always the logo — this is who GC Records is.

So how do they know the new logo is a win? Well, there’s always the wait-and-see period when a brand rolls out a new identity. Lucky for GC Records, they have an especially vocal audience, and the vocals have been raging positive since the latest chopped-hand logo release.

What do you think about the new GC Records logo? If you’re thinking about rebranding, or want to share your story, get in touch!

We spoke to Ashley Minner, the Baltimore community artist fostering connections with storytelling.